So this is where we are at.  Travis​ is in a ton of pain. He is on Fentora,  Fentanyl and oxycodone and still has a lot of pain. In order to get Fentora you have to be opioid resistant, have cancer and chronic pain.  It's something the pharmacy only orders for him, they don't just keep it on hand. It blows me away to see how much pain he is still in. He can't walk real well.  He doesn't leave the house unless he really has to, and it's in a wheelchair when he does.

He has a sinus tract in his colon that is allowing stool to flow through, which is what is so painful.  It's causing inflammation and is pressing on his sciatic nerve.

His surgeon won't operate on this part of his colon because it is radiated tissue and the risk is that it won't heal at all and then he will bleed out.  He thinks Trav should get a colostomy. His surgeon was present when Trav got a colonoscopy with his GI doctor, which was cool...but we felt also influenced his opinion.  His GI Dr said he wouldn't hesitate getting a colostomy to improve quality of life.

We have an appointment with a neurologist this week to look at some spasms and hopefully help with pain options.

We are also meeting with another surgeon to get a 2nd opinion this week.  We've been waiting patiently for this appointment, she is at the U and works with colo-rectal cancer!

A colostomy is not the worse thing, but at 33 it's a long term life altering decision that we don't want to rush into.  We are praying for some clarity this week so we can move forward.
Posted by Broncos Freak at 7:23 PM No comments:

The plumber just told me that he knows exactly how I feel because he had some hemorrhoids removed.
Posted by Stacy Jean at 10:34 AM No comments:

Happy Friday the 13th! Another Colonoscopy this morning.

Just a quick update...as usual we have no idea what's going on with Travis. We have guesses and concerns, we hope to have answers tomorrow, but we assume we'll get more questions instead.

What we do know...Trav is in a lot of pain. For those who saw Trav unable to walk last July. ..we are pretty much back to that...not totally there, but with the rate he's going we are weeks away from that.

There is some colonic debris in his presacaral area, something with his sciatic notch and swelling. All not good things.

I hope and pray for an easy fix or a miracle of some sort, but we are also trying to prepare for all possibilities!
Posted by Stacy Jean at 10:41 AM No comments:

Last week our car broke down and Travis was in excruciating pain. I came home from work and fell on my bed and just cried, after I was done feeling bad for myself I accidentally started this video."If the bitter cup does not pass, drink it, and be strong, trusting in happier days ahead!" I am so grateful for the timing of this video, for latter day apostles and for the easy access to these teachings!

Dr. Gonzales(GI dr performing the colonoscopy) recommends a colostomy. There is a sinus tract that is allowing air and other stuff to pass through. It sounds like the fistula is basically still there. He said some day they may be able to operate, but as of right now the risk is not worth it. The tissue looks a lot better then it use to, not as swollen, which I wonder if that's because he has been on ibuprofen. Dr. said if it was him then there would be no hesitation in getting a colostomy. He is supposed to follow up with Dr. Foley(surgeon). Dr. Foley was also present for the Colonoscopy.

As of right now Travis' pain is so severe and the quality of life is diminishing and so a Colostomy is better than this.

They did not biopsy anything because there were no ulceration or mass effect, which is awesome! No visible cancer!
Posted by Stacy Jean at 10:35 AM No comments:

FaceTime was more realistic today!!! We got Trav home a couple days early. He still has a way to go before being better, but he's able to rest at home, yay! We are all so happy to have him home, just his presence makes us feel more complete!
Posted by Stacy Jean at 6:00 PM No comments:

Things went well today. Travis is recovering in the hospital for a few days. His ostomy is reversed and we are praying that things start working so he can come home!

Posted by Stacy Jean at 6:03 PM No comments:

Hospital had restrictions so the kids couldn't go see Daddy so we did FaceTime instead!!

We are going to miss Daddy while he is at the Hospital. Lots of tears while everyone was going to bed
Posted by Stacy Jean at 6:04 PM No comments: 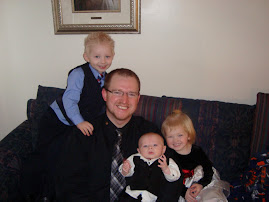